Explore Abu Dhabi's most emblematic monuments and discover the spirit of the United Arab Emirates on this English-language guided tour of the capital. Visit the Grand Mosque and much more! 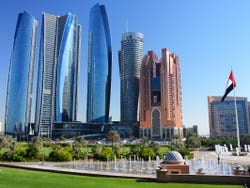 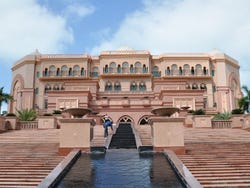 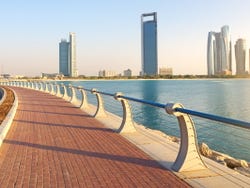 After being picked up from your hotel at 9:30 am, you'll begin your guided sightseeing tour of Abu Dhabi. The first stop on your route will be at one of the UAE capital's most important monuments: the Sheikh Zayed Grand Mosque. The biggest mosque in the country, hence its name, this magnificent gleaming white building is considered to be one of the most impressive Muslim places of worship in the world. It has the capacity for 40,000 people!

You'll spend around an hour visiting the majestic mosque, before being taken to the Corniche. After taking in the beautiful views from this area, you'll continue your tour of the city to the luxury Emirates Palace hotel and the Etihad Towers. You might recognise these incredible modern structures from the seventh Fast and Furious film.

Next, you'll fuel up with a delicious lunch in a local restaurant near the Marina Mall (not included).

Following on, we'll head to Heritage Village. The tour will end going back to your hotel and chosen drop off point.

This activity includes a pick up and drop off service at the hotels in Abu Dhabi.

To enter the Grand Mosque, there is a strict dress code. Both men and women must wear long, loose clothing with arms and legs covered. Women must also wear a headscarf. If you prefer, we will provide you with an abaya, a simple over-garment to cover your clothes in order to enter the mosque.

* A reservation for one person will include a supplement.

Pick up and drop off at your hotel.

Transport by bus or minibus.

Abaya to enter the Mosque.

You can book up until 18 hours before the activity as long as there are still places. Book now to guarantee your spot.

Free! Free cancellation up to 10 hours before the activity starts. If you cancel under this time or do not show up, you will not be refunded.

I travelled by myself
8

I travelled with my partner
Show all the reviews
like

No rating yet
Make the most of you wait at Abu Dhabi airport to discover the United Arab Emirates capital with this Abu Dhabi Private Layover Tour. Visit the modern city.
US$ 270 per group
Book
like

Desert Safari with Dinner and Show

9 / 10 2 reviews
The Yellow Boats' speedboats allow you to see the most famous monuments on the Abu Dhabi coast: are you in?!
US$ 57
Book