Visit Potsdam, not only one of the most beautiful cities in all of Germany but also the city of Prussian Kings and the German Kaiser, home to their infamous armies and most famous palaces. 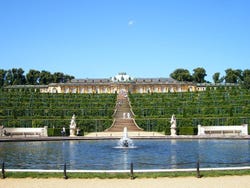 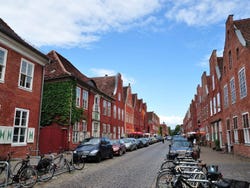 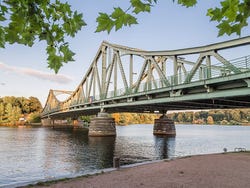 Leaving at 11:00 from the Brandenburg gate, the tour makes its way westwards 24 kilometres to the capital of Brandenburg itself; Potsdam. The home of Prussian Kings and the German Kaiser until the end of the First World War in 1918, its planning takes its inspiration from the enlightenment period in which it flourished under Frederick the Great: with buildings such as the Sanssouci palace, his summer residence and the most important work of Northern German rococo. Indeed his architectural works have become so historically important that they have given rise to the term "Frederician Rococo".

Frederick was equally responsible for two more of the most important buildings you can see on this tour: The New Palace, completed in 1769 and considered to be the last great Prussian Baroque palace, and the reconstructed Potsdam City Palace. This is, in fact, the second reconstruction of the palace, having been reconstructed by Frederick the Great in the 18th century it was damaged during the Second World War and demolished in 1960 for ideological reasons, before being recently re-reconstructed using original components.

You will equally see the Neuer Garten, Dutch Quarter, Potsdam's Brandenburg Gate, The Church of Peace, and the famous Glienicke Bridge, known in popular culture as "The Bridge of Spies". All this comes led by an enthusiastic and knowledgeable guide who put the sights into the context of four great kings and two World Wars.

We will make our way to Potsdam from the centre of Berlin using public transport, therefore it is necessary to be in possession of a metro card for zones A, B and C. If you do not have this card at the beginning of the tour, our guide will help you buy one.

Metro card zones A, B and C.

You can book up until 10 hours before the activity as long as there are still places. Book now to guarantee your spot.

Physical: Wheelchair accessible. This must be indicated in the reservation. An accompanying person is required.

US$ 20.60
No hidden fees or surcharges
Free cancellation up to 6 hours before the service starts
Book

Starbucks by the Brandenburg Gate.

Excellent! The tour guides knowledge was very helpful. Fascinating look at Potsdam and its history.

Our tour guide, Robert McCracken, was a wealth of knowledge! He did such an amazing job explaining the history of Berlin and Potsdam. It was an extremely hot day but his experience truly showed because we had a fabulous experience! A very good value for your money!

Rodrigo from Argentina was very impressive. He had a wealth of knowledge and how it affected the world politically.

The tour was great! Our guide Stephen was very well versed in the history of the the royal family and all the wonderful structures as well. He made it very relaxed and enjoyable. It was a well worth it trip :) i would recommend it to my friends.

I travelled with friends
Show all the reviews
like Free

9.60 / 10 12,914 reviews
Discover the monuments, streets and squares of Berlin with this tour, ideal to get to know the German capital at first glance. What's more it's FREE!
Free!
Book
like

9.50 / 10 129 reviews
An unmissable sight in Berlin which, although perhaps not the most agreeable, brings you face to face with the realities of the Nazi regime in a moving and powerful experience.
US$ 21.80
Book
like

7.90 / 10 104 reviews
Sail along the River Spree through Berlin’s historic center on a one hour cruise and enjoy the breath-taking views of the city’s iconic landmarks.
US$ 20.60
Book