The Jvari Monastery in Mtskheta, the Uplistsikhe cave town and the city of Gori... Explore these three Georgian landmarks in one day with this complete tour from Tbilisi. 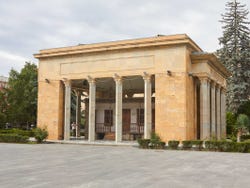 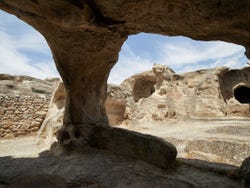 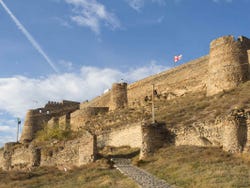 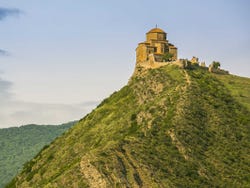 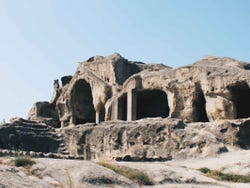 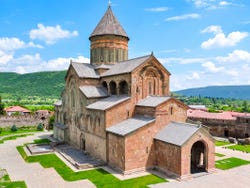 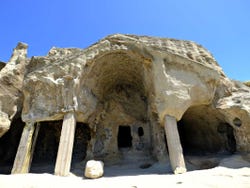 After meeting at the Avlabari metro station in Tbilisi at 8:30 am, we'll set off at 9 am to some of Georgia's most important places of interest: Uplistsikhe, Gori and Metskheta.

The first stop on our tour will be Uplistsikhe, meaning "the lord's fortress", where we'll discover its incredible rocky landscapes. When we arrive, we'll see the nearly 500 caves which date from the Iron Age to the late Middle Ages. Did you know that Uplistsikhe is also known as the Georgian Cappadocia? It'll take your breath away! At 1 pm, you'll have free time to have lunch.

In the afternoon after eating, we'll head to Gori, a city with legendary history known for being the birthplace of Stalin. You'll have time to explore the city's historic centre and visit the Gori Fortress or the Stalin Museum, an exhibition dedicated to the Soviet leader. This medieval citadel has archaeological evidence dating it to several centuries BC!

Later, we'll make our way to the Jvari Monastery, a UNESCO World Heritage Site that offers unparalleled panoramic views over Mtskheta, the former capital of Georgia. We'll hear all about the history of the monastery, said to be the place where Christianity was first brought to the country. Finally, we'll visit the Svetitskhoveli Cathedral, an impressive Orthodox church in Mtskheta and the final resting place of many of Georgia's monarchs.

At the end of the trip we'll take you back to Tbilisi, arriving around 7 pm.

Children under 3 years old go free on this activity provided they sit on their parent's lap. If they require their own seat, you'll have to pay adult price.

The activity takes place with a guide that speaks in english, although it may occasionally be done in two languages.

Entry to the Stalin Museum: US$ 5.

Entry to the Uplistsikhe archaeological site: US$ 5.

You can book up until 9 hours before the activity as long as there are still places. Book now to guarantee your spot.

Free! Free cancellation up to 24 hours before the activity starts. If you cancel under this time or do not show up, you will not be refunded.

Excellent trip, it shows because those guys have such good grades! The attention is tremendous, 10/10 in definitive for the attention with the guests. Georgia is a good destination in that reopening of the world to tourism (context of the Covid) and in dealing with Tbilisi, booking that tour and with that particular agency is a great success. I recommend the experience to the fullest! Opinion translated. Show original.

I travelled with teenagers
Show all the reviews
like

No rating yet
Looking for an original experience in Tbilisi? Marvel at Georgian traditions with a dance performance while dining on the banks of the Mtkvari River.
US$ 141.60 per group
Book
like

No rating yet
Sail down the Kura River and enjoy the incredible views of of Georgia's capital with this Tbilisi Boat Tour. Visit cliffs, the Metekhi church and Rike Park.
US$ 10
Book
like Free

No rating yet
Discover the most important monuments in the capital of Georgia on this free walking tour of Tbilisi lead by an expert guide in the city's history!
Free!
Book